The “Inishowen 100” is one of Ireland’s most scenic drives. Its a 100-mile (160km) circular route around the Inishowen Peninsula in North East Donegal. Bounded on three sides by water, the peninsula is almost triangular in shape, between Lough Foyle and Lough Swilly and bordered by the Atlantic Ocean to the north. With splendid coastal scenery plus a good collection of ancient forts and monuments, traditional craft centres, and a dozen or so friendly villages, many people consider Inishowen to be a miniature Donegal. Scenic highlights include the breathtaking Gap of Mamore, a scenic roadway that rises to a height of 800 feet above sea level before following a twisting corkscrew descent with panoramic views of the entire northern coastline; Malin Head, Ireland’s most northerly point; and Fort Dunree – a magnificent viewing outpost.

Ballyliffin Golf Club. consists of two outstanding, contrasting links courses and 36 wonderful holes make up one of the finest golf resorts to be found anywhere in the world. The Old Links undulates in the glory of its natural terrain, presenting an immensely enjoyable challenge to every golfer. Work recently undertaken by Nick Faldo, one of Europe’s most successful golfers – with victories at the US Masters at Augusta, The Open and on Ryder Cup Teams, has resulted in an Old Links that has been refined and what is now a fantastic golf course. The Old Links hosted the European Seniors Tour in June 2008- The Irish Seniors Open.

The new Glashedy Links is fashioned around the incredible dunes, and is already notorious for its peat riveted bunkers and its opening three challenging par fours. The expansive panoramic views of countryside, coastline and ocean savoured by these magnificent links course will not easily be forgotten. The Glashedy Links has hosted the Irish Inter-provincial Championships in 2006, the European Tour, North West of Ireland Open in 2002 and the Ladies European Tour, Ladies Irish Open in 1998. 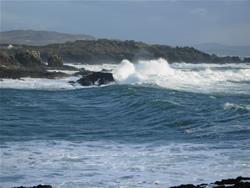 Malin Head is a favoured spot for bird watchers; most significantly it is one of the few places in Europe where you may hear the elusive “Corncrake”. It is also an idyllic vantage point from which to view the Autumnal movements of seabirds such as gannet, shearwater, skuas, auks etc., on their southward migration flight. It is one of the minority sites for observing chough. Fishing and rock angling is also popular in the area.

The Meteorological Station (built in 1955) is at Malin Head and plays its part in the official Weather Forecasts. The Irish Marine Emergency Service is based at the radio station and has a major role in the safety of life at sea. The fishing industry is thriving here; the main catches are crab, lobster and salmon. Malin Head is the sunniest place in Ireland.

The “Wee House of Malin” will reveal that the ‘wee’ house is in fact a cave in the hillside and is said to be the home of St. Muirdealach. Legend has it that no matter how many people entered this cave it always had room for more. Beside are the remains of an old church, which according to tradition was built by St. Muirdealach. Built of split stone rubble and some boulders, only the northeast and south walls now survive.

At Dunargus on the southwest crown of Malin Head a tunnel drives through the rock. It leads to an ancient stronghold and from it the views are outstanding. A once familiar sight were the proud Atlantic liners that passed on the horizon. Malin remains still the home of deep-sea fishing in Inishowen.

There are spectacular rock formations from Malin to Glengad with cliffs rising to a height of over 800 feet providing a majestic sight from the sea and for the adventurous there is a magnificent walk between Glengad Head and Stockarudden along the cliff tops. 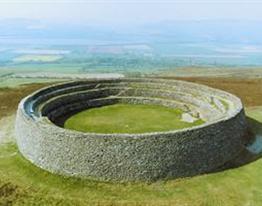 Grianan of Aileach is probably the best-known monument in Inishowen. Situated on a hilltop 800 feet above sea level the stone fort was probably built on an earthen rath. The origins of the Grianan of Aileach fort are dated back to 1700 B.C. It is linked to the Tuatha de Danann who invaded Ireland before the Celts and built stone forts on top of strategic hills. The outline of Bronze Age or Iron Age ramparts can be seen below the fort. Legend states that the giants of Inishowen are lying sleeping but when the sacred sword is removed that they will spring to life reclaiming their ancient lands. Mr. Walter Bernard of Derry restored the stone fort or cashel in the 1870’s. It is the centrepiece of the site, 23m in internal diameter with walls measuring 5m in height and approximately 4m in thickness. It is thought that St. Patrick visited the site in the 5th century and baptised the local chieftain, Eoghan (from whom Inis Eoghan gets its name), here. 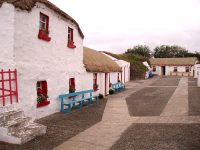 In brief, the Famine Village is an outdoor museum that tells the story of life in the area from the Irish Famine back in the 1840s, through the 1900s to the present day. Different to any other tourist attraction in Ireland the Famine Village depicts life in Ireland as it was, uncommercialised, interdenominational interspersed with humorous anectdotes of Irish life. The Famine Village have a wide array of actual size attractions including original dwellings which were still inhabited little more than 20 years ago. 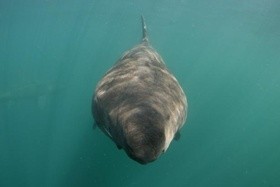 In recent years Inishowen has become synominous with sharks of all shapes and tooth size, so much so that many fishermen and boaters have nick named the dramatic stretch of coastline ‘shark country’. Blue, Porbeagle and Tope ‘catch, tag and release’ fishing form a large part of the marine based tourism industry with a number of shark fishing festivals held annually. However of the entire shark family found on the North Donegal coast the Basking shark is the most iconic for the local coastal communities. Growing up to 10m in length and heavier than an African elephant its difficult to miss the basking shark when out on the water or even strolling along one of the many rugged cliffs tops or pure sandy bays that Inishowen offers to the visitor. It is a harmless docile plankton eater with microscopic teeth but it must still be treated with respect in its own environs. In recent years a group of local marine biologists have made a dramatic impact on the International marine scene with pioneering research on the basking shark. This research has raised the profile of the basking shark considerably on the North coast of Donegal and on the Island of Ireland as a whole. Large aggregations of the animals have been seen with up to 100 sharks at the surface at any one time. Breaching is common with particular regularity between Dunaff head, Tullagh point and Ballyliffen beach. Little or nothing is known about these gigantic fish, the largest in the Atlantic and the second largest in the world. The basking shark have famously been characterised by a boom and bust life cycle so if you get the chance to view these magnificent creatures take it, as it might be the last ‘showing’ during your lifetime.

Inishowen boost some of the most beautiful beaches in Ireland. From secluded, private coves, to long family-perfect strands and Blue Flag beaches. Nothing rejuvenates the mind and body than a stroll along an endless sandy beach and the roar and smell of the Atlantic breakers crashing on the shore. Enjoy quality family time on many of our traditional beaches where the kids can paddles, build sandcastles and enjoy an ice cream while hunting for shells. For couples a romantic stroll along a deserted beach while the sun is slowly going down will remain with you a lifetime and make want to come back time and time again.

Our scenery is literally breathtaking and we guaranteed views that will lift your spirits and remain with you for ever. Apart from the beautiful postcard classic there are so many more stunning scences to be discovered in every part of the peninsula. The ever changing seasonal shades and skies also mean the colours and hues are always different no matter what time of year you visit.

Inishowen is unique in terms of the outstanding beauty of its geography and in the way that the traces of its history survive to this day, conveying an evocative picture of a vibrant and unfolding past.

Inishowen has definitely put its stamp firmly on Irish arts from theatre and literary heritage to music, film, art and exhibitions. Frank McGuinness, Sean Beatie, Ros Harvey and Sharon McDaid to name but a few. Be inspired by the beauty and depth of our historical past and cultural fabric.

There is an abundance of local drama groups and productions dotted throughout Inishowen. A natural talent and flair shows the true character of Inishowen.

Head off on one of our many stunning trails and take in the natural beauty of the region, Why not take along some homebaked goods for a picnic enroute or perhaps your hotel or guest house will do a tasty picnic basket full of delicious local treats. With hundreds of secluded beach coves, hill-side lay-bys and designated picnic and barbeque areas you’ll find your perfect spot.

When it comes to music, Inishowen has something for everyone traditional, jazz, bluegrass and contempory. It is renowned for the quality and diversity of its live music with venues such as McGrory’s Backroom hosting many famous national and international artists. Local hotels and pubs invite local artists to perform showcasing unique and local music talent. Many of our major festivals are devoted to music such as the Clonmany Festival and Buncrana Music Festival.