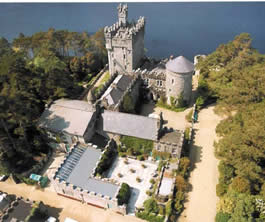 Glenveagh National Park lies in the heart of the Derryveagh Mountains in the north-west of Co. Donegal. It is a remote and hauntingly beautiful wilderness of rugged mountains and pristine lakes. The Park, over 16,000 hectares in extent consists of three areas. The largest of these is the former Glenveagh Estate, including most of the Derryveagh Mountains. To the west are the quartzite hills around Crocknafarragh and to the south, the peatlands of Lough Barra bog, Meenachullion and Crockastoller.

Glenveagh National Park is located 24km north-west of Letterkenny and can be reached via the villages of Kilmacrennan or Churchill. Access from Letterkenny is by the (N56) road through Kilmacrennan, turning left on to the Gweedore road (R255), or alternatively via Church Hill, and past Gartan and Akibbon lakes (R251). This route passes close to both Newmills and the Glebe Gallery. 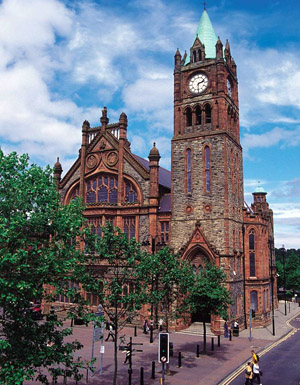 Derry (Londonderry) is the only remaining completely walled city in Ireland and one of the finest examples of Walled Cities in Europe. The Walls were built during the period 1613-1618 by the honourable, the Irish Society as defences for early seventeenth century settlers from England and Scotland.

Few places in these islands can offer such a compelling and unique experience for the visitor as the Walled City of Derry – its setting on the steep hills overlooking the wide sweep of the River Foyle, its distinctive architecture and its famous walls all provide enormous appeal.

A walk around the walls in Londonderry reveals a splendid city crammed full of history, heritage, interest and a vibrant cultural scene.

The Walls, which are approximately 1.5km in circumference, form a walkway around the inner city and provide a unique promenade to view the layout of the original town which still preserves its Renaissance Style street plan to this day.

The Walls vary in width between 12 and 35 feet.are the most complete in Ireland and one of the finest examples in Europe of Walled Cities. The city claims Europe’s largest collection of cannon whose origins are known precisely. Many of them thundered in anger over the two seventeenth century sieges. In 2005 the surviving 24 cannon were restored, and under expert supervision and often by hand, craftsmen, cleared the barrels of centuries of rubbish, stripped off layers of paint and corrosion and bathed, sponged and waxed the cannon back to their former glory. The cannon are displayed throughout the City Walls with the impressive Roaring Meg located on the double bastion.

Add to this a potent history – evidence of which runs from the earliest times right up to the recent past – and all of this adds up to a story that is interesting, relevant and substantial.

The Causeway Coastal Route covers eighty miles of coastline across two counties, beginning in Belfast in the south-east of Antrim and ending in the Walled City in County Londonderry, in the north-west.

Along the way, there are fishing villages, quiet beaches, mountains and landscapes which poets and artists have celebrated in words and colour. Compare your visits to Carrickfergus and Cushendun with Louis MacNeice’s poems of the same names.

The route is easy to follow and the highlights include Giant’s Causeway, Carrick-a-rede Rope Bridge, Dunluce Castle, Glenariff Forest Park, White Rocks Beach and Londonderry. These places always bring thrills and memorable experiences but don’t just stay on the route. There are seven scenic and interesting loops to make off the path which take in areas of outstanding natural beauty: Torr Head, Slemish Mountain, Rathlin Island, Benone Beach, Cushendun and Binevenagh Mountain with remarkable views will inspire great memories.

There are country parks and forests where the seasonal flowers and unusual plants are best enjoyed close up.  Streams and waterfalls flow into peaceful valleys. See nine glorious glens where sudden sunlight so easily transforms the beauteous valleys into a spectacular tapestry of changing colours, mood and serenity.

There are scenic surprises you will find on and off the route. Deserted ruins of castles, churches, cairns and forts remind the traveller of transient time. Defiant Dunluce stands on a cliff, resisting the incessant waves below.Mussenden Temple mocks the harsh cliff face below and the ruined mansion behind. Irish chieftains fought and won possession of lands, a castle and a friary in Antrim. Myths and legends abound with ghosts and giants associated with coastal and inland places. Saint Patrick’s disciple, Olcan, is buried at Armoy, not far off the main route.

There are many leisure opportunities for golfing, cycling, angling and walking along the Causeway Coastal Route.  This isn’t a journey to rush, so make time for sightseeing and relaxation.